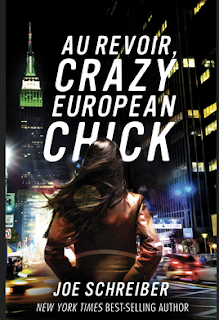 Despite sleeping in the same house, Perry and the homely exchange student, Gobi barely know each other, or so Perry thinks. Perry's parents insistence that he take Gobi to the prom sends him on a crazy adventure with a completely different person than he thought he knew. Perry experiences a tumultuous night of attempted murders, robberies, and intrigue on the night of prom as well as the night of his bands first major concert. As the night progresses Perry is forced to do things he never thought he was capable of.

This is a wonderful adventure book that has endearing characters, action, humor, and intrigue. Perry's adventure is both captivating and interesting. His sense of humor provides the right amount of comic relief amidst the bullets flying and the blood spilling. This book is a bit violent and would probably be best for upper junior high students and high school students.
Link to the book trailer for Au Revoir, Crazy European Chick
Posted by CatTheBookLady at 7:40 PM